Copy-editing is when a person called a copy editor edits a book after the author and editor have finished working on a book. I didn't understand copy-editing at first. My first times getting copy-edited were with my first prose books Bed and Eeeee Eee Eeee. It didn't make sense to me for a publisher to pay another person, besides the author and the editor, to read and edit a book.
Now I understand copy-editing. A book is so complicated that even with the author and editor going through it many times, there will likely be some-to-many mistakes—style choices that aren't consistent, things that unintentionally don't make sense, facts and dates being wrong, etc.
I got the copy edits for Leave Society last week, and it included a style sheet, which I think I haven't gotten before. The style sheet had (1) a list of style rules that the copy editor discerned that I used and some errors that she corrected (2) a list of certain words in the novel (3) a list of names in the novel (4) a timeline of the novel's events from 1971 to 2018.
Here are the words:
Acheulean
Adderall
Airbnb
Altamonte Mall
American Dental Association
amnesic
Angelika Film Center
ankylosing spondylitis
anticancer
aprotinin
Aquarium Barcelona
authoritarianly
ayo

Leave Society has 4 parts and 32 chapters. I worked on each chapter so that they could each work as a short story. The chapters range from ~1300 words to ~8000 words.

Below is a deleted scene from Leave Society. This scene occurs in a park by Li's parents' apartment in Taipei. Didi was edited out of the novel. The only dogs in the novel now are, I think, Dudu and Momo.
*
They encountered Didi, a small, male, shirted dog. Dudu and Didi seemed uninterested in each other. “From behind, they look very similar,” said Li’s dad, as he did every time the two dogs met.
The walk continued.
Li’s dad called Didi "dāi bǎn."
“Dāi means stupid, right?” said Li.
“Right,” said Li’s mom. “Bǎn means board.”
“What kind of board? Wood?”
Li’s dad said a cutting board.
Li asked if dāi bǎn meant conventional and unexceptional.
Li’s dad said it meant “unable to change” and “goes by rules.”
Li’s mom said it meant “not flexible.”
"Dad called Didi dāi bǎn," said Li, amused.
"He has to criticize everything,” said Li’s mom.
Posted by Tao Lin at 12:10 PM 10 comments:

I blogged about ily at htmlgiant. Hobart published my poem "Antirelationship Period." I found a paper someone wrote about my Twitter account. I've read a little of it.

I read Alan Rossi's blog today. He is forty and doesn't use social media and has never used it except Twitter for a month it seems. I recommend his novel Mountain Road, Late at Night.

It's 9/11. I posted nonfiction titled "My 9/11 History" on Patreon in April. It required a membership to read, but recently I made my Patreon posts free. I'm probably not going to use Patreon anymore.

I finished two mandalas recently. I would like to publish a book of my mandalas one day. 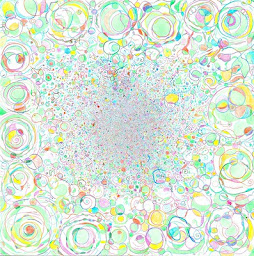 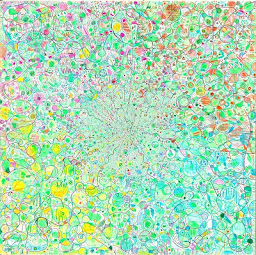 On December 10, 2019, I tweeted "My novel Leave Society is a threat to everyone including me" but now after two more drafts I think it's more of a gentle, calm suggestion or idea.

The protagonist of the novel, Li, views leaving society as "a relative thing." He has lived in NYC since 2001 and in midtown Manhattan since 2011, and has been immersed in pessimistic, neurotic, nature-ignoring cultures and subcultures for decades, and so he feels that "almost any change would qualify."

In my novel, leaving society is mostly viewed as a mental and chemical and cultural thing. One can leave society to varying degrees by changing what one reads, for example. By replacing—to any degree—newspapers with nonfiction books that reference outside the mainstream, one is leaving society.

My novel defines "society" as "dominator society"—the thing almost everyone seems to have been embedded in for around 6,000 years. The other end of the continuum of social organization from "dominator" is "partnership." Riane Eisler invented these terms in The Chalice and the Blade (1987).

I got large, round glasses around two years ago because the frames don't block as much of my vision as frames of glasses with smaller lens do, and because there's less distortion on the edges. 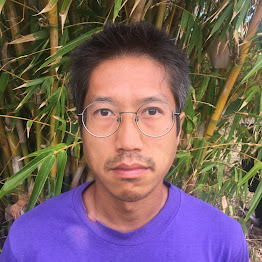 They seem normal to me now, but sometimes I've been aware though that I look "less credible" to some or most people while wearing them, in part because they look somewhat Harry Potter-like. Credibility has been more important to me since 2013 or so when I started reading a lot of nonfiction books, doing research on nature and society, and writing about my research. So for my author photo that I just sent my publisher I used my credible glasses, with smaller lens. 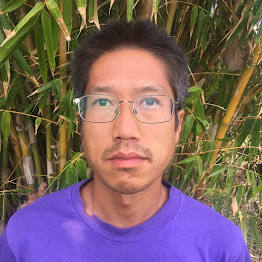 This glasses topic was in my forthcoming novel, Leave Society, but it was deleted in an early draft. A draft from November 2018 said:

The next day, walking alone stoned, Li realized he slightly tilted his head back all the time so that the top part of his glasses frames wouldn’t block his vision. He realized that if he wore glasses with huge round frames, his whole body would assume a more natural position. Realizing people would think he was wearing atypical glasses just to be weird, he felt reluctant to do it.

*Photos by Yuka Igarashi
*Update* After discussing with Yuka, I decided to also send a round-glasses photo. *Update*
Posted by Tao Lin at 12:59 PM 8 comments:

I finished the third draft of my novel today. It's 1952 words or 2.4% shorter than the second draft. I worked on the third draft from July 29 to August 25. It's in four parts. I read and edited the first part once, then read and edited the second part twice and did the same for the third and fourth parts, then went through the whole book a final time. It's ~80,300 words now. My main method of editing for this novel has been to repeatedly go through it beginning to end.
My editor thought the word "recovery" should be better defined, and I worked on that by copy-pasting every instance of "recovery" in the novel into another file, reading through it occasionally, and thinking of what to add or change. I previously did this with other threads in the novel too—a meta thread (in which the protagonist is writing the novel), a thread on "the mystery", a thread on microfireflies, a thread on the end of history, a thread on the partnership-dominator fall.
I had two files open whenever I was working on the novel. One was the novel. One was a file with unused material and metadata and other things, like a to-do list for the novel. In the latter file, I organized unused material into topics. I had/have these topics:
Autism
Bickering
Big Bang
Blaming
Blushing
Caldicotting
Cannabis
Change
Coleman
Compulsive-recursive
Consciousness
Cosmos
Cotton Field
Daoism
Degneration
Diet Coke
Doctors
Dreams
Drugs
Drug phase
Earth
Electricity
EMR
EMR—photons/electrons
EMR—schumann resonance
Exercise inventions
Emergent properties
EMF
Emily Martin
Feelings
Fertility
Friends
Glyphosate
Hutchison Effect
Ily
Jesus
Kathleen Harrison
Imagination
Learning
Living
Mercury
Meta
MKULTRA
Microbiome
And so on. Here is an example of what unused material I had in a topic (for Daoism):
-In China, metaphysics was called xuánxué, the dark learning, he knew from Ellen Marie Chen. Its main texts were Zhuangzi, Daodejing, and I Ching or Book of Changes. Chen defined xuánxué, which also translated to “the mystery school” and was close to Daoism, as “the search for what humans consider to be the profoundest values and their efforts to embody these values.”
-on how Dao may have originally been a female deity represented by a circle, which bifurcated into yin and yang
-and Mágū, a Daoist deity associated with cannabis and caves.
-on the Daodejing’s “emphasis on the feminine,”
-“origin was rooted in the worship of the Mother-goddess”
-Dao was playful, spontaneous
-Translate “dark” line myself—玄 之 又 玄
-玄 was in Daodejing 12 times
-Laozi was an older contemporary of Confucius.
-Daodejing is “a hymm to the power and love of Tao as the Great Mother.”
-Chen called death “merely one stage of Life’s endless transformations”
-that when people see something mysterious, they say very xuán.
-In Daoism, wrote Chen, “the grotesque and deformed and weak” belonged more to the process of change and so were “closer to the Mother.”
-xuan—"black, dark; mysterious, profound, abstruse, arcane”
-and wrote the Daodejing before going, post-retirement, to live in seclusion
-which was attributed to Laozi (literally “old teacher”), and which Chen felt was more fittingly called “the old wisdom,”
-of the trinity of birth-death-rebirth
Posted by Tao Lin at 3:23 PM 11 comments: